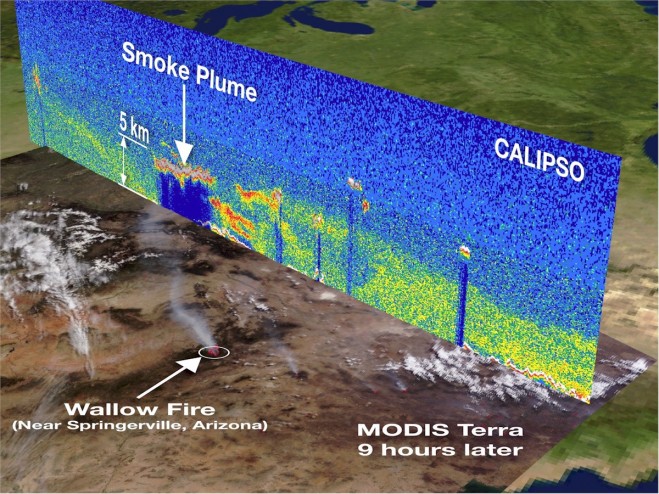 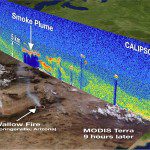 A CALIPSO vertical profile from space, overlaid on a MODIS image, shows the smoke plume June 3 from wildfires raging in Arizona. NASA/Kurt Severance, Jason Tackett and the CALIPSO team

How has it been able to take that many shots? CALIPSO sends out 20 laser pulses every second, and each is only 20 billionths of a second long. That’s a lot of profiles observed, “but if you add all the pulses up, the laser has only produced light for one minute,” said Chip Trepte, CALIPSO’s project scientist, based at NASA’s Langley Research Center in Hampton, Va.

“That we are still making measurements after five years is a testimony to the hard work and dedication that the many engineers and scientists gave to make this a reality.”

Climate Answers
The satellite is providing information to scientists and researchers from more than 35 countries. The data are helping answer questions about Earth’s warming and cooling patterns as they are affected by clouds and aerosols, which are tiny particles suspended in the air.

“CALIPSO is continuing to provide very valuable information about climate, the weather, and air quality. We now know where the layers of pollution are and how they move over the globe. We didn’t know that 5 years ago,” said Trepte.

“Before, we had the ability to look at clouds just like you see on the Weather Channel—and we didn’t know what altitudes they were at or the numbers of layers they had. After five years of data we really have a very good idea of how these clouds systems look.”

The satellite uses light detection and ranging (lidar) technology, which is similar to radar but employs light instead of microwave energy. The lidar measures, vertically from space, the thickness and composition of clouds and aerosol layers and their altitudes.

Data from the satellite is helping scientists understand where aerosols block sunlight and under what conditions high ice clouds warm the atmosphere and lower clouds cool the planet.

CALIPSO is part of the “A-Train,” a constellation of five satellites. CloudSat is one of those satellites and was launched with CALIPSO. It uses radar to profile clouds. Together, CALIPSO, and CloudSat have produced a unique view of clouds that are filling in gaps in our understanding of how clouds affect climate. The two fly in orbital formation with three other Earth-observing satellites.