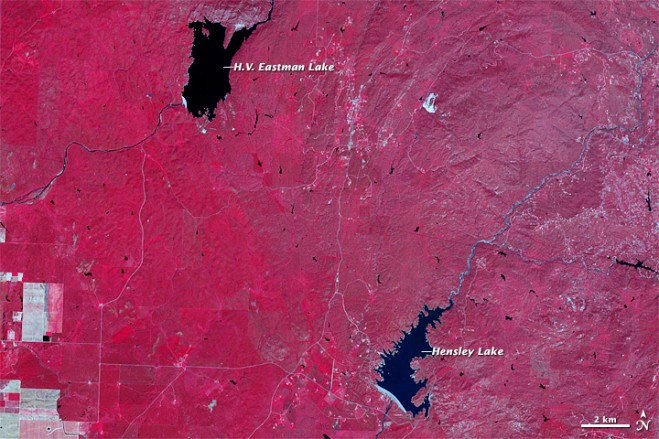 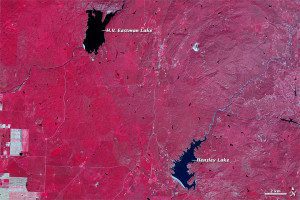 In this 2011 image acquired by NASA’s ASTER instrument, California’s landscape was comparatively lush with vegetation, which appears red, and the lakes were robust.

On July 31, 2014, 82 percent of California was in an extreme drought and 58 percent was in exceptional drought—up from 79 and 36 percent just two weeks earlier. Infrared satellite images are striking. The drying of farmlands and suburbs is mirrored by the shrinking of the state’s reservoirs. 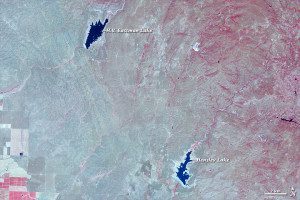 After three years of drought, this 2014 ASTER image shows a browned landscape and lakes that have shrunken considerably. In the lower-left corner, farmland doesn’t appear to have changed much. In fact, some areas look like they have more vegetation in 2014, though that could be because the 2011 image was taken earlier in the spring.

The Advanced Spaceborne Thermal Emission and Reflection Radiometer (ASTER) instrument on NASA’s Terra spacecraft captured the accompanying false-color views of central California on April 5, 2011, and May 15, 2014.

ASTER collects data in infrared, red and green wavelengths of light, which are combined to make false-color images where vegetation appears red; buildings and roads are white and gray; water is dark blue; and dry, barren land is tan.

The images show an area north of Fresno, Calif., between the San Joaquin Valley and Yosemite National Park. The scene includes two reservoirs—H.V. Eastman Lake and Hensley Lake—that were built for flood control, irrigation and recreation in the 1970s by the U.S. Army Corps of Engineers.

Read the full story and use NASA’s image-comparison tool.