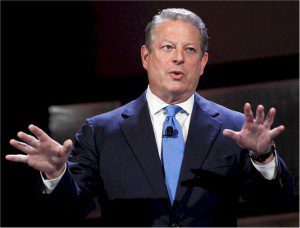 Former U.S. Vice President Al Gore speaks during the World Business Forum in New York on July 9, 2012. He envisioned the Triana satellite would provide a near-continuous view of Earth and make that live image available via the Internet.

Gore outlined the concept for a NASA satellite that could monitor Earth continuously and beam back pictures 24/7 from an orbit 1 million miles away. He named it “Triana,” after Rodrigo de Triana, the sailor in Christopher Columbus’ crew who first spied the New World.

NASA spent about $100 million on the satellite, only to see its launch delayed and ultimately canceled after Republican leaders in Congress raised questions about its cost and scientific worth. After George W. Bush’s election in 2000, the satellite was consigned to storage at a Maryland warehouse. But in 2008, the National Oceanic and Atmospheric Administration and the Air Force moved to rescue it for a mission that had nothing to do with climate change or inspiring pictures.

One of the instruments aboard the satellite was a sensor that can monitor disturbances in solar weather, including flare-ups that have the potential to wreak havoc on global communications. The United States currently has only one satellite that can provide an early warning of these disturbances. That probe, the Advanced Composition Explorer, was launched in 1997 and already is more than a decade beyond its design life.