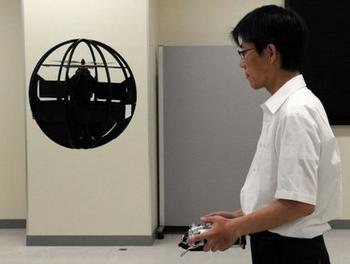 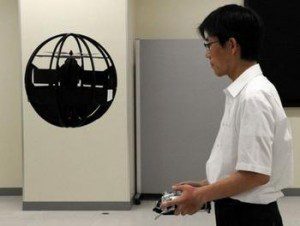 The Spherical Air Vehicle (SAF) is the size of a beach ball and is controlled by an operator with a remote control. It is powered by a propeller protected by a spherical shield with large openings for airflow, allowing it to hit a wall or a tumble to the ground without damaging the propeller. Tech.blorge reports the device’s designer is continuing to work to improve it. The designer says that in the future the SAF could be used as a formidable pursuit vehicle that can travel above traffic or spy on a target through a window.

Its inventor says it could also help in applications such as search and rescue in disaster zones, where it could fly through buildings and even up and down stairways. According to the developer, Fumiyuki Sato, a research engineer at Japan’s Technical Research and Development Institute Ministry of Defense, this is the world’s first spherical air vehicle.

Sato said there are still obstacles to be overcome before the SAF can be out to practical use—among them coping with turbulence and harsh weather conditions. Also, the current model requires the operator to keep the device in his vision to control it.

A more advanced model will solve these problems. According to Sato, it could then hover above a motorcade for security, or, if in pursuit of a fleeing target, it could go below an electric cable, fly above the next one, and then turn a street corner.