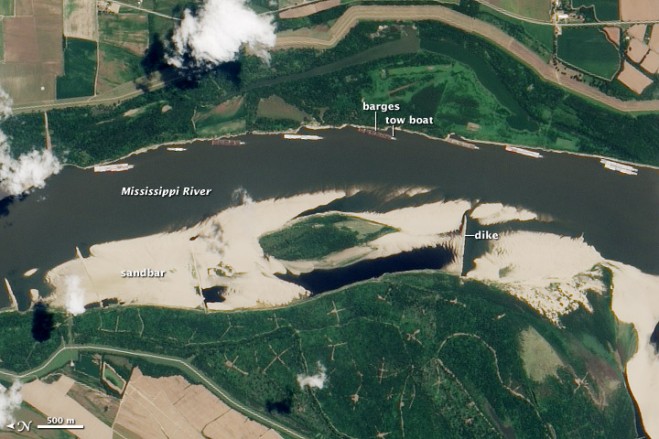 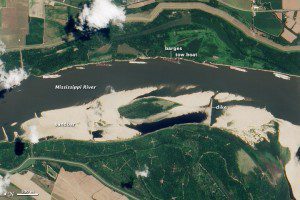 The ALI sensor aboard the Earth Observing-1 satellite captured a view of the Mississippi River near Greenville on Aug. 20, 2012. The grounding occurred about 6 miles south of the bridge that carries Route 82 across the river.

As drought continued to parch much of the United States in August 2012, the Mississippi River approached historically low water levels in several portions of its middle and southern reaches. As of Aug. 20, a towboat and its barges had run aground in the main river channel, forcing its closure near Greenville, Miss. The grounding backed up shipping traffic—an occurrence that is becoming more frequent this summer—and left close to 100 vessels waiting for the channel to re-open and allow passage up and down the river.

Many towboats and barges were tied up along the shores, waiting for clearance to move north or south. Towboats must continually idle their engines while waiting, at a cost of nearly $10,000 per day, according to Time magazine. Even before the closure, shipping traffic was limited to one vessel at a time due to the low water. The river last experienced similar closures during the drought of 1988.