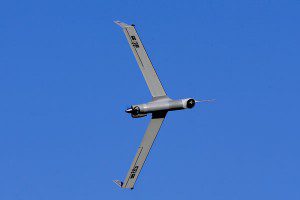 The Boeing ScanEagle, which can fly for 20 hours on a couple of gallons of fuel, was developed to help commercial fishermen find and track schools of tuna. The Navy has used the plane to watch pirates. In recent years, North Dakota law enforcement and the University of North Dakota have used the drone to monitor rivers during flood threats in the Red River Valley.

Many academic institutions are eager to cash in on the booming market for unmanned aircraft system (UAS) operators expected to develop when UASs become legal to fly in U.S. airspace.

Two student pilots are seated shoulder to shoulder before a bank of video monitors, maneuvering an unmanned aircraft by keyboard and mouse as the drone descends toward a virtual runway in a suburban landscape.¨Aaron Gabrielson and Andrew Regenhard, aviation students at the University of North DakotaÂ (UND) and self-proclaimed video-game junkies, could just as well be sitting on a couch playing Xbox. But instead of tapping their fingers on a controller, they’re learning to fly the plane and use onboard equipment that includes a camera with a zoom lens.

“Some people argue that nothing is going to be like flying an actual airplane, said Regenhard. Granted, looking down and seeing you’re 5,000 feet above the ground is pretty exciting, but I’ve always been addicted to video games, and this is awesome.”

Mastering the Corsair simulator is the first practice course for the two trainees, who are among hundreds of student pilots nationwide preparing for jobs that don’t exist yet. The university’s unmanned aircraft degree program, the nation’s first, exploded from five students in 2009 to 120 students last year. Dozens of other schools offer UAS courses.

“This pie is pretty big,” said Al Palmer, director of UND’s unmanned aircraft program. “Everyone can get their little slice of the pie, because we can’t do all the training in North Dakota.”

The skills needed to fly larger unmanned planes aren't unlike those required to fly modern aircraft with computer-based flight controls, according to professors. The toughest part of unmanned flying comes with doing it from the ground: You can’t feel what’s going on.

“You don’t have feedback,” said Regenhard. “When you push the yoke forward in the aircraft, you feel yourself and everything going down. With this, you just see it.”