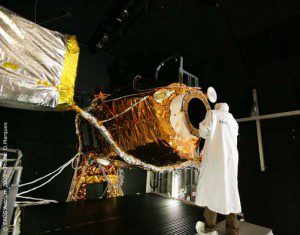 The Pleiades 1A satellite's main telescope was assembled in Cannes, France, by Thales Alenia Space.

A Russian Soyuz rocket fired six satellites into space Dec. 16, including Pleiades 1A. The identical Pleiades 1B satellite, which is already built, will not be launched before March 2013, to give the satellites' owner, the French government, time to check out Pleiades 1A and confirm its performance.

The two Pleiades satellites were built by Astrium Satellites and Thales Alenia Space under contract to the French space agency, CNES. Originally slated for launch in 2008 and 2009, respectively, the satellites suffered multiple delays in their development. More recently, the launches were postponed as CNES waited for their intended carrier rocket, the Europeanized version of Russia's Soyuz vehicle, to enter service at Europe's Guiana Space Center spaceport here on the northeast coast of South America.

The Europeanized Soyuz was ready as of June, but Pleiades' owners had decided against risking the program on the inaugural Soyuz mission. That decision cost Pleiades several more months of delay because of schedule slips in the arrival of two European navigation satellites that ultimately were successfully launched aboard the first European Soyuz Oct. 21.

Astrium Geo-Information Services officials have made clear their frustration with the delays, especially since the global competitive landscape for Earth observation imagery was transformed in mid-2010 with a 10-year, $7.3 billion contract awarded in about equal parts to two U.S. companies from the U.S. National Geospatial-Intelligence Agency (NGA).

The contract, called EnhancedView, is formally a one-year commitment followed by nine one-year renewals for GeoEye of Dulles, Va., and DigitalGlobe of Longmont, Colo. Both companies have invested in expensive new satellites and ground gear on the assumption that EnhancedView will be continued through the entire 10-year period, and both are now watching anxiously as NGA and other U.S. government agencies battle to protect their programs in a rough budget environment.

Astrium Geo-Information Services' relationship with the French government bears little resemblance to its U.S. competitors' association with their anchor customer, the NGA.

CNES financed 90 percent of the two-satellite Pleiades program through the annual contributions CNES receives from the French Defense Ministry. CNES is the French government's space system prime contractor for most satellite programs, whether they are civil or military.

CNES officials said Pleiades is now expected to cost 760 million euros, or about $1 billion at current exchange rates. Ten percent of that was paid by four European governments that agreed to take small equity stakes in Pleiades in return for a pro rata share of the imagery and work shares for their national industry: Belgium, with a 4 percent stake; Spain, with a 3 percent stake purchased by the Spanish Defense Ministry; Sweden, 3 percent; and Austria, 0.4 percent.

In return for financing 90 percent of the program, the French government has reserved access to specific percentages of Pleiades' output of 900 images per day once both satellites are in their 700-kilometer, near-polar low Earth orbit, spaced 180 degrees apart.

The French Defense Ministry has priority access to 50 images per day from the two-satellite Pleiades system. Civil agencies of the French government have access to 40 percent of the remaining Pleiades output, with Astrium Geo-Information Services claiming 60 percent.

Astrium will integrate Pleiades into a product offering that includes France's Spot 5 satellite and the German TerraSAR-X and TanDem-X radar Earth observation satellites. Spot 5 has a 5-meter imager that, when resampled and put through Astrium's image-enhancement software, produces 2.5-meter-resolution imagery.

Astrium Services is investing 300 million euros of its own money, with no French government support, to build and launch the Spot 6 and Spot 7 satellites in the next two years, each with an imager with a 2-meter ground sampling distance and a swath width of 60 kilometers. The imagery can be sharpened to 1.5 meters with image enhancement.

Pleiades imagers have a 70-centimeter ground sampling distance. When subjected to the same software treatment, the result is a 50-centimeter-resolution image that, for most users, is indistinguishable from an image taken from a satellite image with a 50-centimeter resolution at the start ” such as the GeoEye and DigitalGlobe instruments, according to Charlotte Gabriel-Robez, head of the Pleiades product line at Astrium Services.

We have never pretended that the imager's raw output is 50 centimeters, Gabriel-Robez said during a Dec. 12 press briefing on Pleiades organized by CNES. What we do say is that an independent rating system has confirmed that this software can deliver what we say it can.

Gabriel-Robez was referring to the National Imagery Interpretability Rating Scale (NIIRS), developed by SPIE, the international society for optics and photonics.

Astrium has already sold rights to direct tasking of Pleiades toMDACorp. of Canada, which will use Astrium-provided mobile image-reception units for Canadian defense forces; Pasco of Japan; and EastDawn of China.

We will reserve Helios for when we need strategic imagery, Garcia-Brotons said during the Dec. 12 briefing. We will use Pleiades for more tactical purposes closer to operations. For us, the fact that we have priority access to the imagery, and a guaranteed confidentiality, is important.

Laurent Boniort, director of space reconnaissance at France's arms procurement agency, DGA, said a big advantage of Pleiades over Helios is its ability to provide color imagery in four spectral bands”blue, green, red and near-infrared”and the satellites' agility in orbit.

Pleiades will be able to swivel on its axis”back and forth, left and right”up to 30 degrees off-nadir, enabling it to cover more territory than its 20-kilometer swath width would otherwise provide.