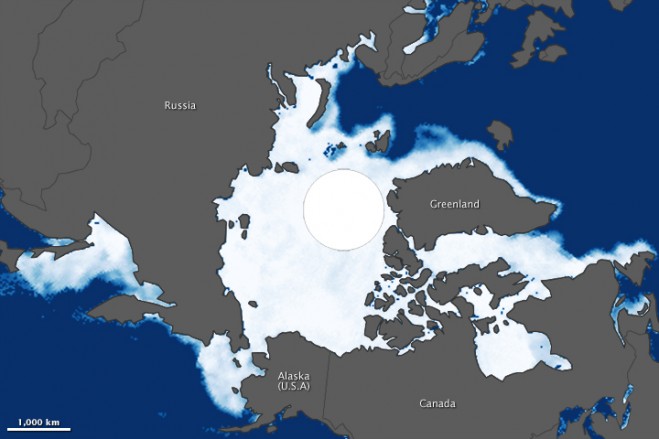 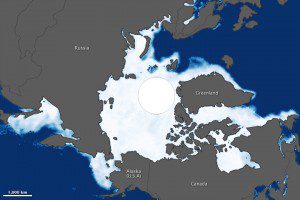 This March 14, 1983, map of Arctic sea ice was made from observations by the Scanning Multichannel Microwave Radiometer on the Nimbus-7 satellite.

Satellite observations show that in September 2012 the ice cap over the Arctic Ocean shrank to its lowest extent on record—about half the average summertime extent from 1979 to 2000. 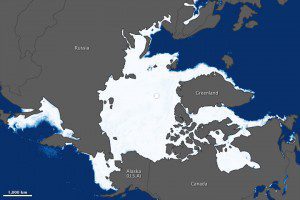 That sea ice minimum continued a long-term trend of diminishing ice cover during the last few decades. During the darkness and bitter cold of Arctic winter, new sea ice forms and older ice re-freezes and grows. This growth typically reaches its maximum extent in late February or early March.

According to a NASA analysis, this year’s annual maximum extent was the fifth lowest in the last 35 years. The yearly maximum—15.09 million square kilometers (5.82 million square miles)—was reached on Feb. 28, 2013, according to scientists at NASA’s Goddard Space Flight Center.

The 2013 winter extent is 374,000 square kilometers (144,402 square miles) below the average maximum extent for the last three decades. Scientists at the National Snow and Ice Data Center (NSIDC) assert that the Arctic ice maximum occurred on March 15, 2013. Their calculated extent of 15.13 million square kilometers (5.84 million square miles) was less than half a percent from the NASA maximum extent.

The two institutions use slightly different methods in their sea ice assessments, but overall their trends show close agreement. In both cases, the 2013 measurement fits with the ongoing trend: nine of the 10 smallest ice maximums in the satellite record have occurred in the last decade.