August 21, 2018
Archaeology from Afar in Uzbekistan 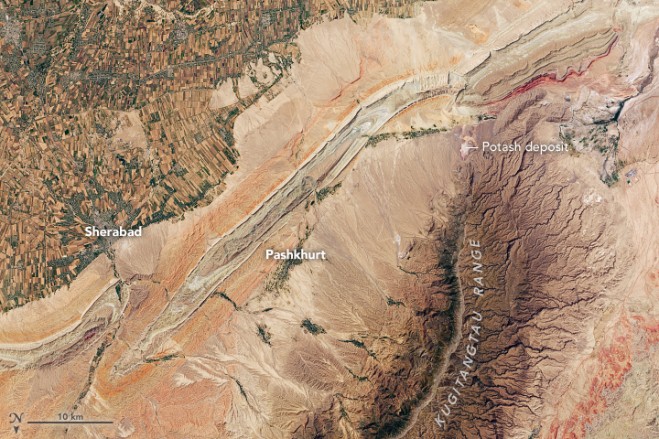 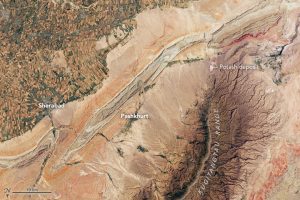 This image, acquired by the Operational Land Imager (OLI) on Landsat 8 on June 27, 2018, centers on a colorful sequence of sedimentary ridges in southern Uzbekistan near several of the sites. The ridges are sandwiched between croplands flanking the Sherabad River and the Kugitangtau Range. (Credit: NASA Earth Observatory images by Joshua Stevens, using Landsat data from the U.S. Geological Survey and topographic data from the Shuttle Radar Topography Mission)

Teams of archaeologists from the Soviet Union began visiting the province in the 1950s to catalog its archaeological riches—remnants of towns, irrigation networks, burial mounds, pottery, weapons, and many other items. In the past decade, satellites have made a contribution from above as well. Since 2008, Ladislav Stančo of Charles University has led a team that used satellite imagery to systematically survey the area for archaeological sites.

The researchers relied mainly on declassified spy satellite imagery from the Corona program, but they also gleaned insights from the Advanced Spaceborne Thermal Emission and Reflection Radiometer (ASTER) on NASA’s Terra satellite, Landsat satellites, and several commercial satellites. Stančo and colleagues identified dozens of new sites and followed up with field expeditions to several new sites.