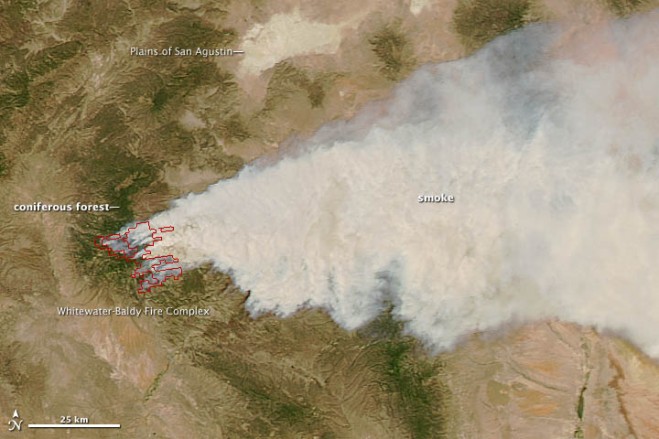 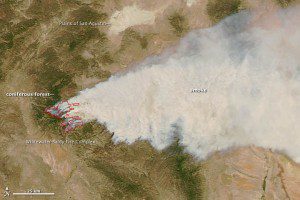 When MODIS captured this image, the fire was burning through a densely forested area around Willow Mountain, a 10,760-foot peak in New Mexico’s Mogollon Mountains.

The U.S. Forest Service said the erratic blaze in Gila National Forest had grown to about 152,000 acres by Tuesday—just 5,000 acres from breaking the state record. It is about 15 miles east of Glenwood, N.M., a small town with a few hundred residents. More than 1,100 firefighters and nine helicopters from around the state were fighting the blaze, but officials said extremely low humidity will keep making efforts against the fire difficult.

The Plains of San Agustin, a dried lake bed with minimal vegetation, is also visible near the top of the image. The plain is home to a world-famous radio telescope facility used by astronomers called the Very Large Array. Strong winds pushed wildfire smoke across much of southwestern New Mexico. The area is sparsely populated, but onMay 22, 2012, authorities ordered a precautionary evacuation of Willow Creek, a campground and summer community just north of the fire. Two days later, the fire had destroyed 12 summer homes and seven outbuildings at Willow Creek. Strong winds and rugged terrain have proven significant obstacles for crews attempting to fight the blaze.