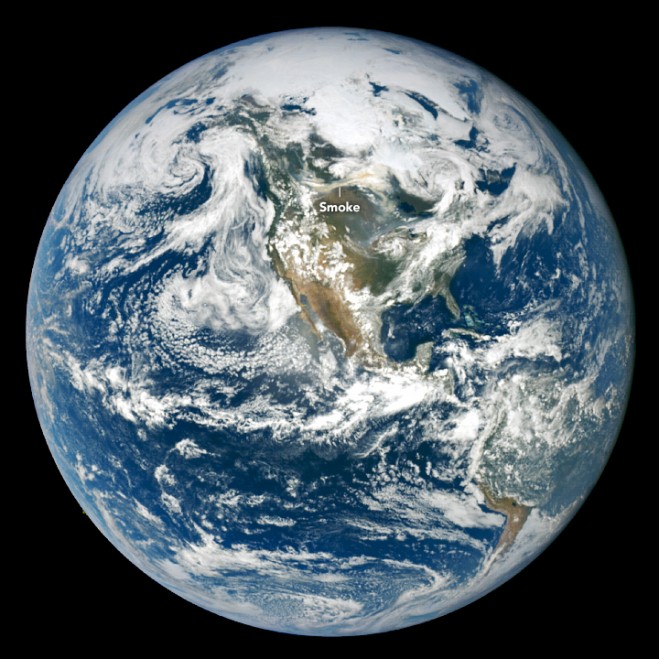 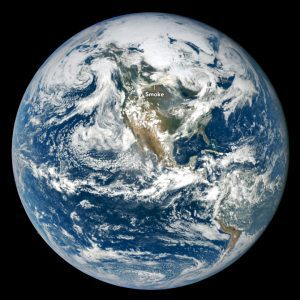 Smoke from several large wildfires in Canada was so thick and widespread that it was easily visible from 1.5 million kilometers (1 million miles) away from Earth. NASA’s Earth Polychromatic Imaging Camera (EPIC) on NOAA’s DSCOVR satellite acquired this image on May 30, 2019, when a river of smoke was streaming east across Alberta, Saskatchewan and Manitoba.

One of the largest sources of smoke was the Chuckegg Creek wildfire. Though it has been burning since May 12, 2019, unusually gusty winds and dry conditions triggered rapid growth on May 29, forcing authorities to issue evacuation orders for 10,000 people. On May 31, the provincial government noted that nine other fires were burning out of control, five were “being held” (not likely to grow past expected boundaries), and 10 were under control.

The intense burning fueled pyrocumulus clouds, which lofted smoke high into the atmosphere and allowed high-level, fast-moving winds to transport it long distances. According to a special air quality advisory issued by Environment Canada on May 31, people in parts of northern, central and southern Alberta faced poor air quality and reduced visibility. “Individuals may experience symptoms such as increased coughing, throat irritation, headaches or shortness of breath. Children, seniors and those with cardiovascular or lung disease, such as asthma, are especially at risk,” the agency noted.

With elevated concentrations of particulate matter in the smoky air across much of Alberta, citizens encountered gloomy, reddish skies. “In Edmonton, it looked like we were on Mars,” said Matt Albers of the Meteorological Service of Canada.