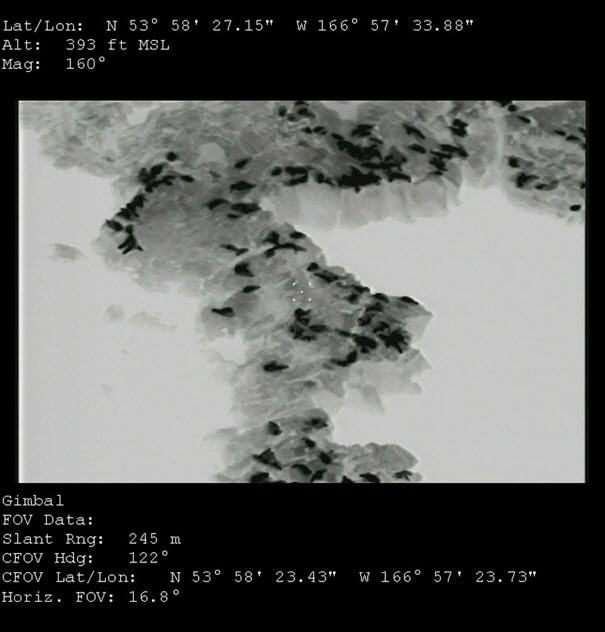 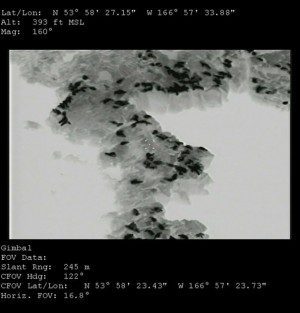 Imagery acquired by a UAV shows Stellar sea lions gathered on the rocks.

Between June 14-15, researchers from the Poker Flat Research Range tested the AeroVironment Puma AE, an unmanned aerial vehicle (UAV) that they hope will aide scientists in studying the decline in western Alaska’s Stellar sea lion population.

Since the 1970s, the National Marine Mammal Laboratory has monitored sea lion populations by conducting annual fly-overs, collecting images and video. However, an aerial survey of wildlife can be both dangerous and expensive. For example, renting a de Havilland Twin Otter (DHC-6) can cost up to $4,500 per day.

“It’s not cheap,” said Gregory Walker, manager of the University of Alaska (UA) Unmanned Aircraft Program based at Poker Flat Research Range. The aircraft UA now owns can cost about $3,500 per day to operate. The unmanned craft Walker tested costs as little as $1,000 per day.

Walker will eventually pick two new unmanned vehicles, pushing the universities total to 11. While the AeroVironment Puma AE Walker recently tested is likely to be one of the two, he hopes to evaluate at least two more. “It’s very promising,” he added.

While Walker doesn’t believe he’ll ever find the perfect aircraft, he’s impressed with the Puma AE. He stated that the craft is lightweight (only 14 pounds), easy to install, waterproof, and durable. It is also quieter, which means the animals photographed will be less likely to notice it. The Puma AE was originally designed by the U.S. Navy to protect Navy SEALs during beach assaults.

Durability is important for Walker, since the current fleet of UAVs are both large and fragile. Owning a craft that can be both hand-launched and which can land in open water is important. The only major drawback to the Puma AE, is its inability to fly in winds over 30 knots (34.6 mph).

Stellar sea lion populations in the western Aleutian Islands have decreased since the 1970′s. As a result, the animals were placed on the endangered species list and fisheries near their habitat were closed. According to 2005 study released by the Alaska Sea Grant/Marine Advisory Program, such closures have forced small-vessel fisherman to travel farther out to sea, which has increased costs and hazards.

The recent test was partially underwritten by the North Pacific Fisheries Foundation, which hopes better data collection will ultimately lead to the fisheries being reopened.

Walker stated that the new aircraft will be used for work outside of monitoring sea lions. Some of the work listed included arctic ice surveys, responding to emergencies, and oil exploration.

According to Walker, having newer (and better) unmanned craft will put UA ahead of other research institutions. With the new craft “we can do things that other universities can’t,” he said.

Image courtesy of The University of Alaska Fairbanks/Greg Walker