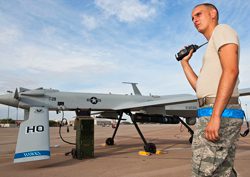 Industry analysts estimate the Pentagon will procure nearly $50 billion worth of remotely piloted aircraft by 2020.

The deployment of Air Force remotely piloted spy aircraft across Iraq and Afghanistan grew rapidly during the last eight years, at the same time the Army also expanded its fleet of unmanned surveillance drones. In the face of budget cuts in the coming years, the Pentagon is suspecting there might be too many intelligence, surveillance and reconnaissance (ISR) programs across the Defense Department.

“In a declining budget environment, we are going to have to be careful” about duplicating investments or spending funds on ISR programs that may not be needed, said Air Force Secretary Michael Donley.

It’s not just the cost of the ISR hardware that Pentagon budget officials worry about. Paying for the labor—both military personnel and contractors—associated with unmanned aircraft operations has become “unsustainable,” Donley said.

Industry analysts estimate the Pentagon will procure nearly $50 billion worth of remotely piloted aircraft (RPA) by 2020.

According to Donley, the forecast is being revisited because there may be more than enough assets in the services’ inventories than is actually needed.

“Our view is that the Department of Defense needs to look at the totality of the ISR capabilities,” he said. “We need to make some choices about how we further develop our ISR capabilities, concepts of operations, infrastructure. Manpower requirements are growing at rates that are not sustainable.”

Earlier this year, Vice Chief of Staff Gen. Peter Chiarelli also suggested that there might be too much overlap among the services’ ISR programs and that these projects may be ripe for cutbacks. Every branch of the U.S. military now operates vast ISR fleets, including large numbers of spy drones of all shapes and sizes, as well as manned aircraft—fixed- and rotary-wing—equipped with loads of sensors. Redundancies are justified in some cases, but there are areas where inefficiencies should be targeted, according to Chiarelli.

Both the Army and the Air Force, for example, operate similar fixed-wing unmanned air vehicles (UAVs) for ISR missions. During the last several years, the Army has bulked up its UAV fleet, even as Air Force officials questioned the need to have duplicate fleets. The Army made a convincing case to Defense Secretary Robert Gates that it could not solely depend on Air Force ISR support and that brigade commanders required their own UAV squadrons.

With leaner times approaching and U.S. forces in Afghanistan drawing down, the Pentagon may no longer afford or need so much ISR support, according to Gates.

The U.S. military also might be able to take advantage of new advances in UAV technology that are reducing the manpower demands.

New generations of UAVs are increasingly more “autonomous,” so operators can spend less time driving and minding the robots. A single operator can instruct the UAV to remain in a specific airspace or track an individual vehicle, and a single control station can be used to operate three aircraft at once.

Industry experts attributed the rising cost of UAV operations to the lack of technological standards for drone communications and data sharing. As the Pentagon rushed to deploy drones during the last eight years, most robotic vehicles were purchased with proprietary data systems and ground-control stations that are not compatible across the fleet.

“That has pooled a huge manpower and logistics trail, which is unsustainable in the budget,” said Mark Bigham, vice president of business development for Intelligence and Information Systems’ Defense and Civil Mission Solutions at Raytheon. “We’re going to have to find a way… to do more with no more, and in fact, to do more with less. We believe that that is driving us toward a radical shift in the way we buy and acquire capabilities in the [unmanned aircraft systems] market.”

The trend is toward open architecture in control systems so that ground stations can operate multiple types of aircraft.