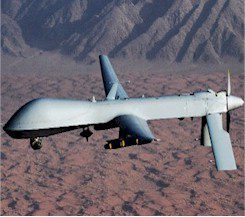 Known by the acronym ACES HY, the first airborne hyperspectral system will provide the Predator unmanned aircraft system real-time detection and geolocation of tactically significant targets for cueing the onboard Multi-Spectral Targeting System.

Hyperspectral sensors trade spatial resolution (what we see with the naked eye) for spectral resolution (captured light from across a wide swath of the electromagnetic spectrum). Because all materials reflect a specific spectral signature, objects on the ground can be identified based solely on the way they reflect light, even if the object isn’t visually discernible.

Raytheon designed and built the first hyperspectral sensor for space. ARTEMIS was originally intended as a one-year experiment, but now it has completed its second year on orbit, exceeding its design life by 100 percent. It was transitioned by the U.S. Air Force to an operational role in June 2010. It produces approximately 100 hyperspectral imagery products per month, delivering key intelligence to the warfighter within hours after sensor tasking, 10 times faster than during the initial experimental phase.

The next generation of hyperspectral sensors being developed by the company will take advantage of the unique attributes of the bands of the infrared (IR) spectrum. Mid-wave IR hyperspectral sensors will be able to identify faint heat signatures from space, and long-wave IR sensors can be used to characterize effluents, such as factory plumes, providing applications for treaty monitoring, drug interdiction and enemy reconnaissance.