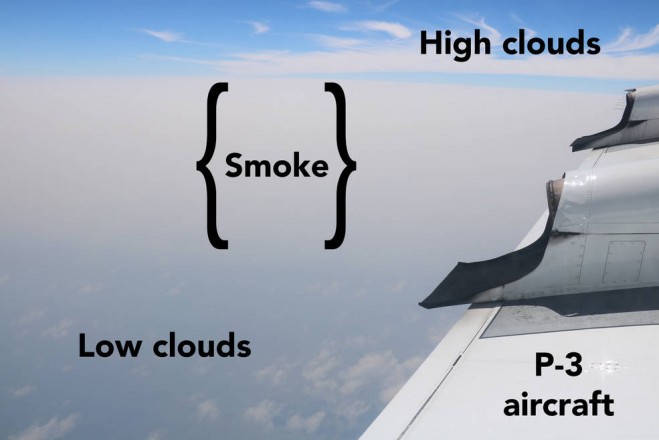 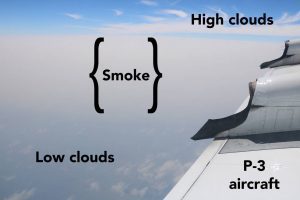 A thick haze of milky-gray smoke overlies a blue ocean surface dotted with puffy white low clouds in this view of the smoke-cloud system over the southeast Atlantic Ocean, taken from the window of the P-3 during a science flight on Aug. 24, 2017. (Credit: Michael Diamond)

Over the southeast Atlantic Ocean, a 2,000-mile-long plume of smoke from African agricultural fires meets a near-permanent cloud bank offshore. Their meeting makes a natural laboratory for studying the interactions between cloud droplets and the tiny airborne smoke particles. This month, NASA’s P-3 research aircraft and a team of scientists return on their third deployment to this region as part of the Observations of Aerosols Above Clouds and their Interactions mission, or ORACLES, gathering data on how aerosols such as smoke affect clouds and in turn Earth’s climate.

“The cloud deck in the southeast Atlantic is one of the largest on the globe,” said atmospheric scientist Paquita Zuidema of the University of Miami, Florida, and co-principal investigator for the ORACLES deployment. “At the same time, the smoke layer stretches all the way to South America. The combination of smoke and clouds generates enough atmospheric warming to affect precipitation patterns over Africa in climate models, making it imperative to develop better confidence in the model predictions.”

Aerosols include sea salt, dust, pollen and any particles, like smoke and ash, released during burning from industry or forest fires. Small enough to travel on prevailing winds, they are an important part of the atmosphere. Dark-colored aerosols can absorb sunlight, causing a warming effect, and light-colored ones can reflect sunlight, causing a cooling effect. Smoke can do both, depending on whether the particles within it occur over the dark ocean and look whiter in comparison, or above clouds and look darker.

Understanding how clouds and aerosols cooperate to determine the balance between climate warming and cooling is at the heart of the ORACLES mission, as well as the microphysical effects smoke particles can have on cloud droplets when they meet.