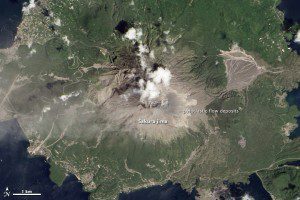 Compared with the Landsat 8 image below, most visible change in this image is a field of pyroclastic flow deposits from Showa Crater. On the eastern (right-hand) slopes of Sakura-jima, light-colored channels are visible on an older deposit. These are likely the result of erosion that revealed light, unweathered material or the deposit of fresh ash by short-lived streams.

Japan's Sakura-jima volcano typically is known for one or two small explosions every few days, but on Aug. 18, 2013, the volcano surprised everyone by breaking its established pattern. 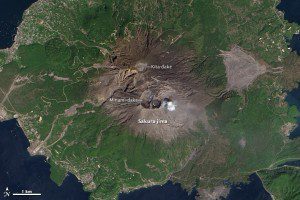 In a series of almighty belches, the volcano blasted more than 100,000 tons of ash five kilometers into the air. The yellow-brown fog then fell across Kagoshima”the regional capital in southwest Japan and home to more than 600,000 people”transforming day into night and sending residents scurrying for cover. The ash coated car windscreens, making it impossible to drive. It stung eyes, stained clothes and got stuck in hair.

Sakura-jima's last violent eruption was in 1914, and it was the most powerful in 20th century Japan”quite an achievement in an archipelago with 108 active volcanoes. The eruption generated pyroclastic flows”currents of 1,000-degree Celcius gas that can move down the volcano at speed of up to 700 kilometers per hour, vaporizing anything and everything in its path. The lava flows produced by this eruption even filled in the strait separating the volcano from the mainland, forming a peninsula.