A Theoretical Analysis: The Future of U.S. Commercial Satellite Imagery 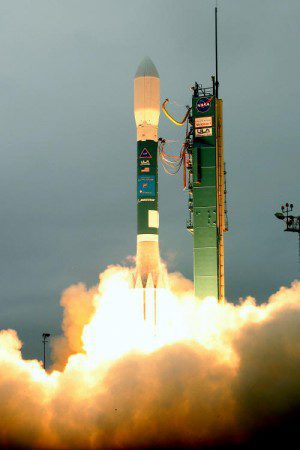 DigitalGlobe's WorldView-1 satellite lifts off from Vandenberg Air Force Base in 2007.

Innovative Analytics and Training released an independent study that posits three alternative futures for U.S. commercial satellite imagery in 2020.Â The study was sponsored by the National Environmental Satellite, Data and Information Service (NESDIS), National Oceanic and Atmospheric Administration (NOAA), within the U.S. Department of Commerce.Â The study was started in late 2010 and includes research conducted up to April 2011.Â The 2020 timeframe was chosen to reflect the dynamic changes in global thinking and global markets about this topic.

The study begins with a detailed review of relevant U.S. policy, legal and regulatory developments from the 1970s to 2010.Â Following a discussion about current remote sensing technology developments, the study posits three alternative remote sensing futures in the 2020 timeframe, with an emphasis on high-resolution electro-optical firms like Digital Globe and GeoEye: 1) U.S. Commercial Satellite Imagery is A Thriving Business; 2) A Slow Growth Business, Still a U.S. Government Appendage; 3) Failure as U.S. Government Funds Erode and Competition Grows.

The reader should note that, by definition, none of these futures is correct nor reflects a prediction or preference of any kind. Alternative future methodologies are designed to identify plausible futures, as well as their underlying factors and drivers, in such a way so that decision-makers can understand important directions on an issue, including those that merit a change in strategy to mitigate or avoid futures with negative outcomes or consequences.

The report concludes with a number of independent observations on the future role of the Department of Commerce and NOAA in the governance of space-based remote sensing.Â For both U.S. and foreign remote sensing countries, space policy and regulation is becoming less relevant (but not irrelevant) to governance of remote sensing as the data is fused with other data sets and incorporated into a broader set of public and commercial applications.

Three appendices are included at the back of the report.Â The first highlights key areas of remote sensing policy and regulation and how they might be re-considered for the 2020 timeframe.Â The final two map European and Japanese approaches to remote sensing over the past decade.Â Here, the reader might take note in the comparative approaches, or the extent to which key U.S. assumptions about foreign behavior were correct, incorrect, or stimulated unintended consequences.

The study was conducted by Robert A. Weber and Kevin M. O'Connell, two senior analysts with decades of experience assessing international remote sensing policies and markets. O'Connell was the co-author (with John Baker and Ray Williamson) of Commercial Observation Satellites: At The Leading Edge of Global Transparency published in 2001 by ASPRS and RAND.