May 15, 2018
A Near-Real-Time Tool to Characterize Global Landslide Hazards 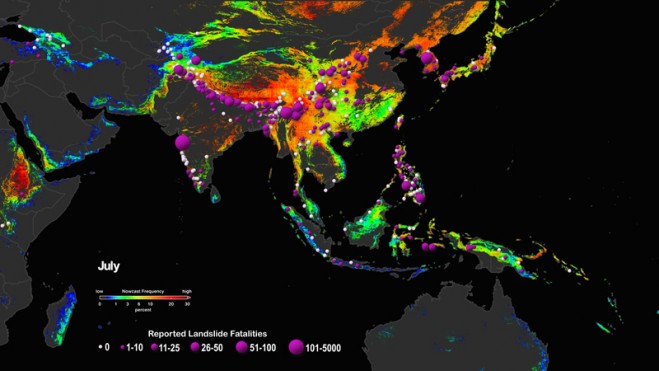 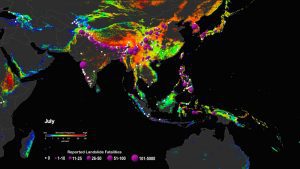 A view of the potential landslide activity in Southeast Asia as evaluated by NASA’s LHASA model. Overlaid are reported landslide fatalities dating back to 2007. (Credit: NASA)

Unlike earthquakes, cyclones, volcanic eruptions, and other natural disasters that are observed in real time by worldwide networks of satellites and sensors, landslides and other types of mass movement are not consistently monitored on a global scale, despite their widespread occurrence and strong likelihood of causing fatalities and disrupting critical infrastructure. This is due, in part, to the challenges of monitoring events that occur across a wide range of settings, lithologies and climatic zones; that are triggered by both anthropogenic and natural factors; and whose volumes can span 10 orders of magnitude.

To help fill this gap, Kirschbaum and Stanley have developed a system that generates near-real-time estimates of potential rainfall-triggered landslide activity. Their Landslide Hazard Assessment for Situational Awareness (LHASA) model melds information regarding slope, lithology, deforested areas, and proximity to fault zones and roads to derive a map of landslide susceptibility, which is then combined with satellite-derived estimates of precipitation from the past week to develop “nowcasts” of areas that are susceptible to landslides.