NOTTINGHAMSHIRE, U.K.,– The Creative Technologies Program at Virginia Polytechnic Institute (Virginia Tech) has created an immersive simulation that enables participants to experience a World War I battlefield with their senses of sight, hearing, and touch. The simulation combines a digital Virtual Reality (VR) environment with a life-sized physical model created from 3D scan data captured with the GeoSLAM ZEB-HORIZON laser scanner.

“The Virginia Tech team has developed a unique experience that brings the reality of war to life for students and museum goers,” said Shelley Copsey, GeoSLAM CEO.

The simulation recreates the tunnels beneath the village of Vauquois in France where French and German troops mined beneath each other’s positions and detonated explosives in the First World War. Almost entirely destroyed, the village is now a series of craters, trenches, and sections of preserved tunnels.

“Vauquois tells a unique story of tunnel warfare in World War I,” said Todd Ogle, Executive Director of Applied Research in Immersive Environments and Simulations at Virginia Tech. “[Participants] crawl through the physical tunnel wearing the VR goggles and can reach out and touch real things.”

Phat Nguyen, a Virginia Tech Visiting Professor, explained the Creative Technologies team had won a grant to develop the immersive technique, but scanning the cramped tunnels with traditional stationary laser scanners was taking too long. Before their second trip to France, they obtained the handheld ZEB-HORIZON mobile device, which turned their project around.

“What was exciting for us was the way this device captured data with accuracy and speed,” said Nguyen. “The speed of field work nearly tripled with the ZEB-HORIZON.”

The handheld ZEB-HORIZON laser scanner allows users to map interior and exterior spaces in 3D at walking speed. The lightweight device captures up to 300,000 points per second with an accuracy of 1-3 centimeters up to 100 meters from the user. SLAM technology ensures points are tied to local coordinate systems even in interior spaces where GPS/GNSS coverage is poor. Large multi-room buildings that might take days to scan with a stationary scanner can be mapped in a few hours with the ZEB-HORIZON.

Read more about this project at https://geoslam.com/capturing-the-reality-of-tunnel-warfare-with-3d-mobile-laser-scanning/ 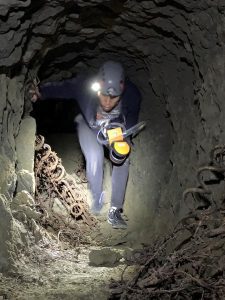 Headquartered in the UK, GeoSLAM is a global market leader in “go-anywhere” 3D mobile mapping technology. Our unique handheld technology is highly versatile and adaptable to all environments - especially spaces that are indoor, underground or difficult to access, providing accurate 3D mapping without the need for GPS. Our technology is easy to use and within minutes customers can build a highly accurate 3D model of their environment. GeoSLAM was founded in 2012 as a joint venture between CSIRO (Australia’s National Science Agency and the inventors of Wi-Fi) and 3D Laser Mapping. Serving the surveying, engineering, mining, forestry, facilities and asset management sectors, GeoSLAM has an expanding global network of over 70 distributors – including over 15 in US locations - https://geoslam.com/contact/.

About the Creative Technologies Program at Virginia Tech

Creative Technologies at the School of Visual Arts at Virginia Tech is a program that focuses on creative practice at the intersections of digital technology and artistic exploration. Students in the CT B.F.A. program will take a wide variety of courses spanning digital media topics, production methods, and theories. The CT program prioritizes individual student growth, the creation of diverse media projects and bodies of work, and the development of each student’s unique creative voice. The program strives for students to become both technically and artistically nimble, which will best prepare them to succeed across numerous creative fields such as (but not limited to) 3D modeling, 3D animation, gaming, motion graphics, video production, virtual reality, and contemporary fine arts practice. The strength of the CT program is that it does not prepare students for one existing digital pipeline or production trajectory but rather engages students with evolving technologies and possibilities of the future.