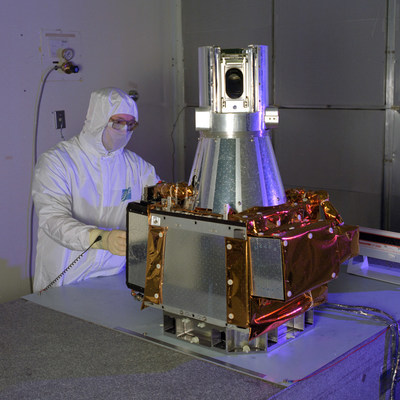 “Ball has a deep legacy in creating instruments and spacecraft for NASA, from helping to measure ozone levels to exploring the farthest reaches of our solar system and beyond,” said Jim Oschmann, Ball Aerospace’s vice president and general manager, civil space business unit. “We are proud to support the ongoing operations of the International Space Station and to further scientific understanding of how the ozone layer affects life on Earth.”

Ball built the Stratospheric Aerosol and Gas Experiment III on the International Space Station, also known as SAGE III on ISS, and designed and built the Vision Navigation Sensor (VNS) for Raven, a technology demonstration that will test autonomous rendezvous capability for future uses with unmanned vehicles in space and on Earth.

SAGE III on ISS, which was designed at NASA’s Langley Research Center in Hampton, Virginia, is a key part of NASA’s mission to provide crucial, long-term measurements that will help determine the health of the ozone layer. The heart of the SAGE III on ISS instrument is the Ball-built spectrometer, which allows scientists to measure the quantity of atmospheric gases such as ozone, nitrogen dioxide, water vapor and aerosols in the Earth’s atmosphere. Ball built three SAGE III instruments dating back to the selection as prime contractor in November 1989 by NASA Langley. Once docked with the ISS, the SAGE III payload will collect measurements through each sunrise and sunset from its orbit approximately 450 kilometers above the Earth’s surface.

Ball’s deep heritage with ozone mapping and monitoring extends more than 40 years. Beginning in the 1970s, Ball built a number of stratospheric aerosol instruments for NASA demonstrating the ability to measure ozone from space, and went on to build nine SBUV/2 instruments that helped discover the ozone hole above Antarctica in 1987 and which have operated since 1984. More recently, Ball designed and built the Ozone Mapping and Profiler Suite (OMPS) currently flying on NOAA’s Suomi-NPP operational environmental satellite, and will deliver four additional OMPS units for the JPSS series of satellites beginning Fall 2017 and continuing through the early 2030s.

Raven is a technology demonstration mission led by NASA’s Goddard Space Flight Center to advance the state-of-the-art in rendezvous, proximity operations, and docking. Raven includes visible cameras, an infrared camera and a flash LIDAR, called the Vision Navigation Sensor (VNS). In building and designing the VNS, Ball has provided Raven with its “eyes,” which will watch vehicles approach and depart the ISS.

Ball Aerospace pioneers discoveries that enable our customers to perform beyond expectation and protect what matters most.  We create innovative space solutions, enable more accurate weather forecasts, drive insightful observations of our planet, deliver actionable data and intelligence, and ensure those who defend our freedom go forward bravely and return home safely. For more information, visit www.ball.com/aerospace or connect with us on Facebook or Twitter.

Ball Corporation supplies innovative, sustainable packaging solutions for beverage, food and household products customers, as well as aerospace and other technologies and services primarily for the U.S. government. Ball Corporation and its subsidiaries employ 18,450 people worldwide and 2016 net sales were $9.1 billion. For more information, visit www.ball.com, or connect with us on Facebook or Twitter.

Forward-Looking Statements
This release contains “forward-looking” statements concerning future events and financial performance. Words such as “expects,” “anticipates,” “estimates,” “believes,” “targets,” “likely” and similar expressions typically identify forward-looking statements, which are generally any statements other than statements of historical fact. Such statements are based on current expectations or views of the future and are subject to risks and uncertainties, which could cause actual results or events to differ materially from those expressed or implied. You should therefore not place undue reliance upon any forward-looking statements and any of such statements should be read in conjunction with, and, qualified in their entirety by, the cautionary statements referenced below. The company undertakes no obligation to publicly update or revise any forward-looking statements, whether as a result of new information, future events or otherwise. Key factors, risks and uncertainties that could cause actual outcomes and results to be different are summarized in filings with the Securities and Exchange Commission, including Exhibit 99 in our Form 10-K, which are available on our website and at www.sec.gov. Additional factors that might affect: a) our packaging segments include product demand fluctuations; availability/cost of raw materials; competitive packaging, pricing and substitution; changes in climate and weather; competitive activity; failure to achieve synergies, productivity improvements or cost reductions; mandatory deposit or other restrictive packaging laws; customer and supplier consolidation, power and supply chain influence; changes in major customer or supplier contracts or a loss of a major customer or supplier; political instability and sanctions; currency controls; and changes in foreign exchange or tax rates; b) our aerospace segment include funding, authorization, availability and returns of government and commercial contracts; and delays, extensions and technical uncertainties affecting segment contracts; c) the company as a whole include those listed plus: changes in senior management; regulatory action or issues including tax, environmental, health and workplace safety, including U.S. FDA and other actions or public concerns affecting products filled in our containers, or chemicals or substances used in raw materials or in the manufacturing process; technological developments and innovations; litigation; strikes; labor cost changes; rates of return on assets of the company’s defined benefit retirement plans; pension changes; uncertainties surrounding geopolitical events and governmental policies both in the U.S. and in other countries, including the U.S. government elections, budget, sequestration and debt limit; reduced cash flow; ability to achieve cost-out initiatives and synergies; interest rates affecting our debt; and successful or unsuccessful acquisitions and divestitures, including with respect to the Rexam PLC acquisition and its integration, or the associated divestiture; the effect of the acquisition or the divestiture on our business relationships, operating results and business generally.