HERNDON, Va. – HawkEye 360 Inc., the first commercial company to use formation flying satellites to create a new class of radio frequency (RF) analytics, today announced it has awarded the manufacturing contract for its next generation of satellites. Enabled by the company’s $70 million Series B financing in August, this contract will substantially boost on-orbit capacity to serve the company’s rapidly growing customer base. The contract will expand the constellation to eighteen satellites, achieving routine revisits of less than an hour for increased global persistence.

“After proving the value and accuracy of our first satellites and securing the Series B investment, we are now quickly scaling our business to support customer demand,” said John Serafini, Chief Executive Officer, HawkEye 360. “These next-generation satellites will improve our capabilities and expand our constellation for faster revisit rates, which translates into better insights for a safer world across maritime, air, and land domains.”

UTIAS Space Flight Laboratory (SFL) will manufacture the bus and integrate the new RF payload developed by HawkEye 360. The satellites will geolocate more signals across a wider frequency range with improved accuracy and reduced data latency for more timely delivery to customers.

“We selected SFL for both its expertise and flight heritage,” said Chris DeMay, Founder and CTO, HawkEye 360. “Their innovative work designing our current satellites met all technical objectives, including reliably conducting formation flying maneuvers. Now, SFL will help us bring this next stage of the constellation to completion.”

HawkEye 360 launched its current cluster of three satellites in December 2018 to validate the technology and inform continuous innovation for the next generation of satellites. Since achieving commercial operations in April, HawkEye has been working closely with customers to test and bring multiple products to market, such as RFGeo and RFMosaic. The RFGeo product identifies and maps the location of emitters (https://youtu.be/W9c2CSJ7d1w) and the RFMosaic product provides broad surveys of RF activity across a region of interest.

More information about HawkEye 360 can be found at www.he360.com. 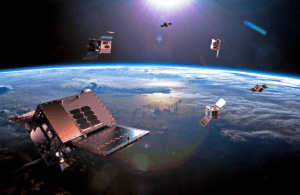 HawkEye 360 is a Radio Frequency (RF) data analytics company. We operate a first-of-its-kind commercial satellite constellation to identify, process, and geolocate a broad set of RF signals. We extract value from this unique data through proprietary algorithms, fusing it with other sources to create powerful analytical products that solve hard challenges for our global customers. Our products include maritime domain awareness and spectrum mapping and monitoring; our customers include a wide range of commercial, government and international entities