Edinburgh/London - Sustainability software and data company Ecometrica, best known for its satellite mapping applications that show the effects of deforestation and climate change, has succeeded in being placed 388th on the FT1000 list of Europe's fastest growing companies. The placing was based on revenue growth of almost 300% in the three years to 2015.

It follows a stellar 2016, which saw the Edinburgh-headquartered company with offices in Boston, London, Montreal and Mexico, posting record sales and clinch further deals with NASA and the UK Space Agency.

The FT, which compiled the list alongside Statista, said innovative and fast-growing companies were “the driving force of the European economy in the 21st century. They generate jobs and sustain Europe’s competitiveness.”

Gary Davis, chief executive of Ecometrica, said: “As we continue to grow rapidly, I expect we will be on this list for years to come. Our latest phase has seen us focus on export markets and expand geographically, especially in the Americas. We have recently opened an office in Mexico and a subsidiary in the US, which has just hired its first employees. We will continue to focus on satellite mapping, and I'm sure that growth will be an ongoing part of our story as more and more governments, organisations and industries wake up to the power of geospatial data and satellite mapping.”

Inclusion in the FT's list comes as Ecometrica is shortlisted for this year's BusinessGreen Leaders Award. The company is in the running for Green IT project of the year for its Ecometrica Platform, which brings together sustainability, environment, risk and business management with geospatial intelligence and mapping applications based on inputs from Earth Observation satellites and people on the ground. 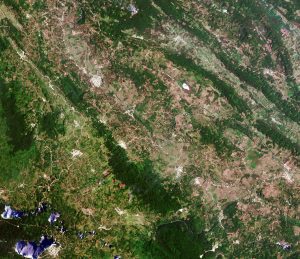 Ecometrica's satellite mapping technology is now being used to protect 300 million hectares of tropical forests after the firm secured £14.2m for its Forests 2020 project from the UK Space Agency's International Partnership Programme (IPP).

Davis added: “Our platform never stays still and we are constantly thinking of new ways to adapt and improve it. Our R&D team actually works very closely with our customers as we aim to ensure it meets their current and future needs, so the product is a testament to their commitment to the Ecometrica platform, as well as to our belief and investment in its development.”

Ecometrica also made Deloitte's Technology Fast 500 list this year thanks to its rapid growth, and has won a string of awards for its products. During 2016, Ecometrica became the first Gold Software Partner for climate change, water and forests programmes with global group CDP, and the Ecometrica Platform scooped Environmental Leader’s Product Of The Year 2016 Award.

Ecometrica, the sustainability software and data company has been named as one of the world’s top Sustainability and EH&S brands by industry analyst Verdantix.

Ecometrica supports all aspects of sustainability planning, operations and reporting by businesses and public organisations. The company's data and software services are available worldwide through offices in London, Boston, Edinburgh and Montreal.

Ecometrica Platform makes the terabytes of raw data being sent to Earth by satellites easily accessible, bringing limitless possibilities for its application.  It is the only sustainability software with audit-ready assurance from a Big Four auditor (PwC). For the largest customers who get their accounts externally audited, this means avoiding costly pre-audit fees that often run into hundreds of thousands of pounds per year.

Ecometrica Platform provides clarity and illumination on environmental impacts, so that clients can decide the appropriate direction for their own organisations.

Ecometrica posted a sales rise of 132% in its last financial year, to £2.77m. And with results now including the growth in the value of assets, such as intellectual property, profits hit £5.3m.