NEWTON, MASSACHUSETTS (USA) – The U.S. Census Bureau has changed the way it ensures privacy for the 2020 Census. The new method is called Differential Privacy (DP). To help people assess some of the implications and unintended consequences of Differential Privacy, Caliper is providing several interactive maps for public inspection.

The first map, created with Maptitude and available at https://www.caliper.com/census-differential-privacy-maps/, shows the change in population for every Congressional district after applying Differential Privacy to the current congressional district boundaries. The map illustrates that the current 116th Congressional District populations would have been different in many instances, with possible implications for service provision, allocation of funds, and political representation*.

Because this method distorts populations for Census Blocks and for all political subdivisions within each State, it is clear that state legislatures would have drawn different district boundaries had Differential Privacy been used in the 2010 Census.

*The non-adjusted PL 94-171 demographics were used for this comparison for consistency with the Differential Privacy 2010 Demonstration Data Product. 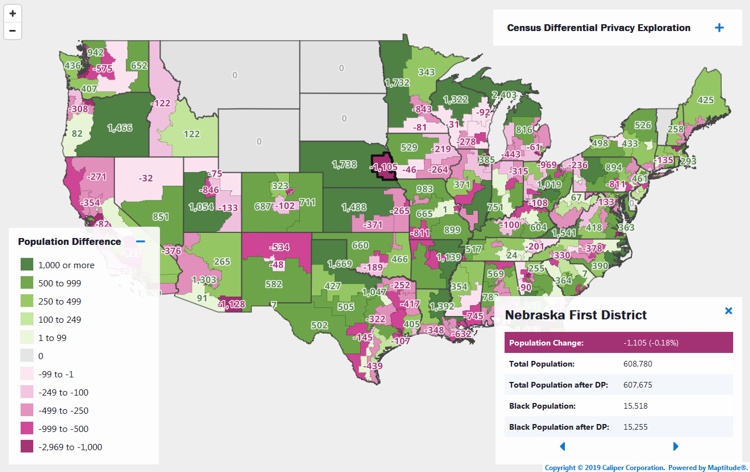 Caliper is a privately held corporation and is a leading developer of mapping, redistricting, transportation, and GIS software