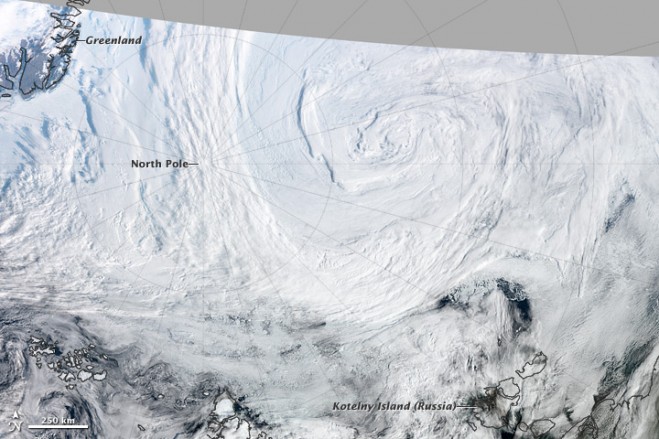 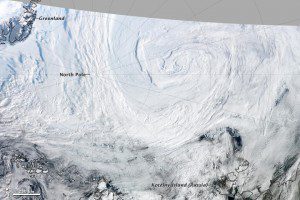 One way climate change may affect Arctic cyclones is by changing the sea ice and ocean temperature. Climate change has caused sea ice to retreat markedly in recent decades and has warmed Arctic Ocean temperatures. Such changes may be providing more energy and moisture to support cyclone development and persistence. Click on image to enlarge.

The combined strength of two storms that merged on Aug. 5, 2012, gave birth to an unusually large, powerful and long-lasting cyclone that churned over the Arctic in early August 2012.
On average, Arctic cyclones only last about 40 hours—as of Aug. 9, 2012, this storm had lasted more than five days. The Visible Infrared Imaging Radiometer Suite (VIIRS) on the Suomi NPP satellite captured this view of the storm on Aug. 7, 2012.

Arctic cyclones are more common during the summer than winter; however, summer cyclones tend to be weaker than the storms that batter the region during the winter. This cyclone’s central sea level pressure reached about 964 millibars on Aug. 6, 2012—a number more typical of a winter cyclone. That pressure puts it within the lowest 3 percent of all minimum daily sea level pressures recorded north of 70 degrees latitude.

The number of cyclones affecting the Arctic appears to be increasing. The cause of the increase is an open question, but climate change may be affecting Arctic cyclones. One study published in Atmospheric and Oceanic Science Letters concluded that the total number of extratropical cyclones in the Northern Hemisphere would decline as the climate changed, but the Arctic Ocean and adjacent areas would see slightly more and stronger summer storms.