Marcia K. McNutt Nominated to Be Next National Academy of Sciences President

WASHINGTON, July 6, 2015—The Council of the National Academy of Sciences has approved the nomination of Marcia K. McNutt, editor-in-chief of the Science family of journals, for election as president of the Academy, to succeed Ralph J. Cicerone when his second term as NAS president ends on July 1, 2016. A geophysicist, McNutt earned her bachelor’s degree in 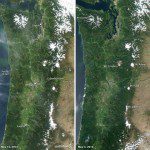 Oregon and Washington are feeling the impact of a warm winter, as their snowpack is just 16 percent of normal. Although the precipitation totals for winter and spring were near normal, it fell as rain rather than snow and didn’t add to the snowpack.

Geospatial Innovation in Spotlight at Esri Conference in DC

Redlands, Calif., Jan. 29, 2015—Technology and government leaders will gather for the Esri Federal GIS Conference in Washington, DC, February 9–10, to discuss the latest geospatial technology and how federal government agencies use it to build a more resilient nation. Keynote speakers include Robert Cardillo, director of the National Geospatial-Intelligence Agency (NGA), and former Maryland governor Martin O'Malley.

The state of Washington created the SR 530 Landslide Commission in response to the deadly Oso landslide that occurred in March 2014. The commission recently released its report to help guide policy and improve planning and response with greater awareness of conditions.