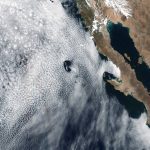 On June 17, 2017, lightning reportedly ignited a deadly wildfire that spread across the mountainous areas of Pedrógão Grande—a municipality in central Portugal located about 160 kilometers northeast of Lisbon.