Newly released US Topo maps for Arizona now feature mountain bike trails, segments of the Arizona National Scenic Trail and Public Land Survey System data.  Several of the 1,880 new US Topo quadrangles for the state now display these selected new features along with other improved data layers. “Having recently returned to Arizona, I am

NASA in partnership with the U.S. Geological Survey (USGS) is offering more than $35,000 in prizes to citizen scientists for ideas that make use of climate data to address vulnerabilities faced by the United States in coping with climate change. The Climate Resilience Data Challenge, conducted through the NASA Tournament Lab, a partnership with Harvard University

The Most Detailed Ecological Land Units Map in the World

Redlands, Calif., Dec. 9, 2014—Esri and the United States Geological Survey (USGS) are pleased to announce the development of the highest spatial resolution ecological land units (ELUs) map of the world ever produced. The Global ELUs map portrays a systematic division and classification of ecological and physiographic information about land surface features. The work was commissioned

A pioneer in mapping global land cover change and the team behind the United States’ most advanced land surface mapping satellite have both been honored with the 2014 William T. Pecora Award for achievement in Earth remote sensing. Sponsored by the Department of the Interior's U.S. Geological Survey (USGS) and NASA, the annual award was presented on

Fairfax, Va., Oct. 15, 2014—Dewberry, a privately held professional services firm, has been tasked by the U.S. Geological Survey (USGS) to conduct a study to collect and refine user requirements and to identify associated benefits for an expanded national hydrography data program that meets federal, state and other business uses and needs.  The study is 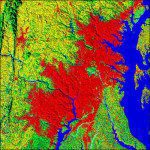