NASA’s Cyclone Global Navigation Satellite System (CYGNSS), a constellation of eight microsatellites that will take detailed measurement of wind speeds inside hurricanes, successfully completed the development and on-orbit commissioning phases of its mission and moved into the science operations phase.

An RS-25 rocket engine with a new flight-model engine controller and flight configuration software was successfully tested for the first time at NASA’s Stennis Space Center on March 23, 2017. 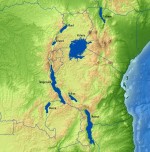 Getech developed a new satellite-based gravity data product that enhances explorationists’ understanding of the East African Rift. Potential fields data have proved particularly successfully within this environment, and numerous oil companies have cited how such information had direct positive impacts on exploration campaigns.

No Obstacles for Airports Using Satellites

Thanks to the European Space Agency (ESA), airports now can use satellites to identify and manage obstacles that could pose a risk to flight safety.

MacDonald, Dettwiler and Associates (MDA) announced on Feb. 24, 2017, that it will acquire commercial remote-sensing company DigitalGlobe for $2.4 billion, the biggest deal to date in the ongoing consolidation in the Earth-imaging market.