Irvine, Calif., Feb. 24, 2016 – Hundreds of methane-emitting hot spots have been identified across the Los Angeles Basin, including a “clean ports” truck refueling facility near the Port of Long Beach, power plants, water treatment facilities, and cattle in Chino, according to new findings by the University of California, Irvine. Atmospheric scientists conducted a 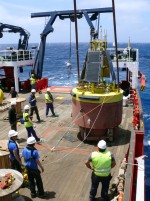 NeXOS is developing standards and technologies that would allow users to share data and operate the sensors via the Web, creating a complete, end-to-end system that would dramatically reduce the complexity and cost of gathering and disseminating ocean observation.

Researchers at the University of Alabama in Huntsville recently shipped a Lightning Imaging Sensor to the Johnson Space Center in Texas in anticipation of its planned flight to the International Space Station (ISS) in March 2016.

Feb. 10, 2015—EdgeTech, a provider of high-resolution sonar imaging systems and underwater technology, has released a new AUV-based sonar system that provides three side scan sonar frequencies as well as sub-bottom profiling capabilities in one compact and integrated system. The company has also announced that a number of the systems have already been built and