BlackBridge to be Acquired by Planet Labs

Berlin, July 15, 2015 — BlackBridge, a leading provider of satellite imagery and geospatial solutions, announced today that it has entered into a definitive agreement for Planet Labs to acquire the RapidEye suite of core offerings. Planet Labs is a provider of a dataset of satellite imagery based in San Francisco, California, that designs, builds, and

Oberpfaffenhofen, July 6, 2015—The tremendous amounts of data produced by the European Earth observation programme Copernicus and its Sentinel satellites open the door to countless products and applications in a wide array of business sectors. The annual Earth monitoring competition, the Copernicus Masters, was initiated to support visionary entrepreneurs to bring their innovations in the application

SAN FRANCISCO, June 23, 2015 — A venture-backed Silicon Valley company, Spaceknow is launching an online service for the automated analysis of satellite imagery to debut at the GEOINT 2015 Symposium. As the lead provider of satellite imagery-derived products, Spaceknow is making its way across the states to the GEOINT 2015 Symposium in Washington, D.C. this

June 19, 2015—Ecometrica, the world-leading sustainability software and data company, has partnered with scientists at Edinburgh Napier and other universities to build an application that will help developing world governments ensure their economic growth is ecologically sustainable. The application, hosted on the Ecometrica Platform, collates satellite imagery to show the scale of environmental degradation to 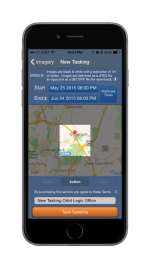