The agreement envisions cooperation in the field of Earth Observation through the Italian “COSMO-SkyMed” radar satellite constellation. Post-doctoral scholarships for Italian researchers will also be available in the United States. Washington, September 9, 2015– The Italian Space Agency and NASA signed an important agreement today on elaboration and analysis of Earth Observation data. NASA will

Robotic Search and Rescue: The New ICARUS System Ready for Use from 2016

On 9-10 July  2015, at the Portuguese Navy Base of Alfeite (Almada) in Lisbon, 24 Project Partners from 9 countries demonstrated the ICARUS (Integrated Components for Assisted Rescue and Unmanned Search Operations) system, as final step of the ICARUS European project (http://www.fp7-icarus.eu/) funded by the European Commission under the Seventh Framework Programme for Research and

VANCOUVER, June 19, 2015—UrtheCast Corp. announced plans to build, launch and operate the world’s first fully-integrated, multispectral optical and Synthetic Aperture Radar (SAR) commercial constellation of Earth Observation satellites (the “Constellation”), to be deployed over multiple launches expected in 2019 and 2020. The Constellation is expected to comprise a minimum of 16 satellites (8 optical

NASA and the Indian Space Research Organization (ISRO) are teaming up to build and launch a dual-frequency synthetic aperture radar satellite to observe natural processes and hazards such as earthquakes, tsunamis, volcanoes and landslides. 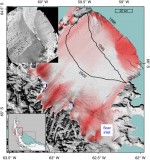 NASA Predicts Coming Collapse of the Larsen B Ice Shelf

NASA scientists recently completed a study regarding the remaining section of Antarctica’s Larsen B Ice Shelf. The shelf partially collapsed in 2002, and the remaining portion has weakened and is likely to disintegrate completely by 2020.

Lanham, Md., May13, 2015—McMurdo, the world’s most trusted name in emergency readiness and response, today announced that it has opened the world’s first Emergency Readiness and Response Experience Center at its Washington, D.C. location. The state-of-the-art center will showcase the latest innovations and technology developments for search and rescue (SAR) in an immersive experience with