The twin Sentinel-1A and 1B satellites, orbiting 180-degrees apart at an altitude of almost 700 kilometers, provided their first combined radar image, demonstrating a capability to reveal small deformations in Earth’s surface.

Every 20 to 30 minutes, somewhere in the world, a person – often a child – steps on a landmine.  It is estimated that over 100 million anti-personnel mines are buried worldwide and a further 200 to 250 million are thought to remain in military storage facilities. This means they pose a constant threat, even

Chile Earthquake on the Radar

On 16 September 2015, an 8.3 magnitude earthquake struck the coast of central Chile, triggering tsunami warnings and coastal evacuations. Lasting three minutes, this powerful earthquake occurred along the boundary of the Nazca and South American tectonic plates. By combining Sentinel-1A radar scans from 24 August and 17 September, the rainbow-coloured patterns in the image

The agreement envisions cooperation in the field of Earth Observation through the Italian “COSMO-SkyMed” radar satellite constellation. Post-doctoral scholarships for Italian researchers will also be available in the United States. Washington, September 9, 2015– The Italian Space Agency and NASA signed an important agreement today on elaboration and analysis of Earth Observation data. NASA will

DLR and NASA Team for 3D Measurements of Forests

July 15, 2015—A tangle of treetops and branches, through which just the occasional clear area provides glimpses of the trunks and roots growing below. Whether it is woodland with German spruces or a tropical rainforest, very few sensors are able to see through this green carpet and clearly visualise the underlying structures. The German Aerospace 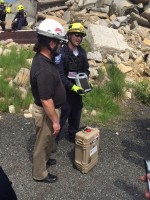