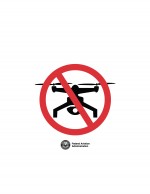 Cities Hosting the Papal Visit are No Drone Zones

WASHINGTON – As the Papal visit approaches, the U.S. Department of Transportation’s Federal Aviation Administration (FAA) is reminding residents of and visitors to Washington, DC, New York, and Philadelphia that these cities and the surrounding communities are No Drone Zones from September 22 through September 27, 2015. “If you plan to attend any of the

WASHINGTON, D.C., May 13, 2015 – U.S. Department of Transportation’s Federal Aviation Administration (FAA) today announced a public outreach campaign for the National Capital Region around Washington, D.C. to reinforce the message that the District of Columbia and cities and towns within a 15-mile radius of Ronald-Reagan Washington National Airport are a No Drone Zone.