Drone Industry Outlook and Predictions for 2018

According to BI Intelligence, sales of drones will surpass $12 billion in 2021, and most of this will occur across the three main segments of the drone industry. 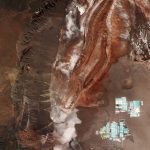