REDMOND, Wash. - Aerojet Rocketdyne, a subsidiary of Aerojet Rocketdyne Holdings, Inc. (NYSE:AJRD), recently completed hot-fire acceptance testing of eight auxiliary engines that will be used on the first flight of NASA’s Orion spacecraft with the Space Launch System rocket, slated to launch in 2018. A photo accompanying this announcement is available at http://www.globenewswire.com/NewsRoom/AttachmentNg/2fb2ecb3-4512-4575-9488-02ae8ace74be Orion’s

ENGLEWOOD, COLO.— Colorado-based Surrey Satellite Technology US LLC (Surrey) has been selected by the NASA Rapid Spacecraft Development Office (RSDO) for inclusion of its SSTL-150 ESPA satellite platform in the third NASA Rapid Spacecraft Acquisition Catalog (Rapid III). Through this contractual framework, Surrey is able to directly engage with NASA and other government agencies for 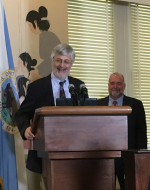 An annual award for outstanding achievement in remote sensing A longtime innovator in space-based Earth observation at Boston University and a team that has paved the way for the next generation of satellite precipitation observations have both been honored with the 2016 William T. Pecora Award for achievement in Earth remote sensing. Sponsored by the