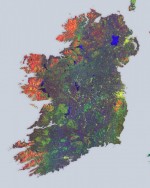 Study Maps Development One County at a Time

SYRACUSE, N.Y., March 25,2015 — Researchers at the SUNY College of Environmental Science and Forestry (ESF) have developed a county-by-county map of the United States’ “lower 48” that tells a story of land cover and development across the nation, and could provide a framework for planners and policy makers as they consider future development. In