OAKLAND, Calif., May 4, 2015 – The Sogi hydroelectric plant, considered a significant contribution to the Meiji Industrial revolution, has been mapped as part of the CyArk 500 Challenge, an international project to digitally preserve and create awareness of some of the world’s most significant cultural heritage sites. The Sogi site has been recorded in 3D by an

The Japan Aerospace Exploration Agency launched a new optical spy satellite aboard a Mitsubishi Heavy Industries H-IIA rocket. The satellite is a replacement for one of two optical satellites that have been in orbit since 2009.

Paris, Washington D.C., Montreal, Yokohama, Feb. 10, 2015—Euroconsult today announced the establishment of an office in Japan, building upon the existing relationship with Shigeki Kuzuoka who has partnered with Euroconsult since 2013. Mr. Kuzuoka will be Head of Euroconsult Japan, based in Yokohama. Mr. Kuzuoka brings 35 years of experience in engineering and business development in

The Japanese government’s Committee on National Space Policy included a discussion of an “operationally responsive small satellite” in its Basic Plan on Space Policy. The discussion will occur during planning for the next fiscal year. 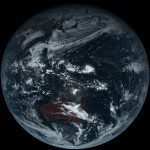 The Japan Meteorological Agency’s Himawari-8 weather satellite, which was launched in October 2014, returned its first images Jan. 8, 2015. The images from the Exelis-built sensor are taken in 16 visible and infrared bands, including three-color visible bands.

A Dnepr rocket carried five Japanese Earth observing satellites into orbit Nov. 6, 2014, from the Dombrovsky military base in southern Russia.