The Pacific Northwest is abundantly dotted with wildfires in Washington, Oregon, Idaho and Montana, and satellite imagery from a variety of sensors is being used extensively to monitor the situation. 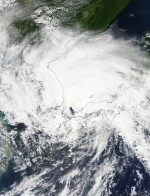 Typhoon Goni Covers Southern Half of Sea of Japan

On Aug. 25, 2015, the Moderate Resolution Imaging Spectroradiometer (MODIS) instrument aboard NASA’s Aqua satellite captured a visible picture of Typhoon Goni after it moved out of the East China Sea and north into the Sea of Japan. The MODIS image also showed that the storm’s western quadrant was over North Korea and South Korea, while the eastern quadrant stretched over most of the big island of Japan.

NASA astronaut Scott Kelly, currently on a year-long mission on the International Space Station, took this photograph of a sunrise and posted it to social media on Aug. 10, 2015.

Located near the western edge of the Sahara Desert, the Eye of the Sahara is a feature that resembles a large eye when viewed from space. Also known as the Richat Structure or Guelb er Richat, the Eye is a symmetrical dome of eroded sedimentary and volcanic rock. 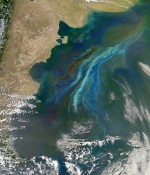 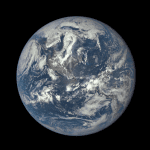 This “Blue Marble” image is the first fully illuminated snapshot of Earth captured by the DSCOVR satellite, which will capture and transmit full images of Earth every few hours. The information will help examine a range of Earth properties, such as ozone and aerosol levels, cloud coverage, and vegetation density, supporting a number of climate-science applications.

A map shows daytime land-surface temperature anomalies in Europe from June 30-July 9, 2015, compared to the 2001–2010 average for the same period. Shades of red depict areas where the land surface was hotter than the long-term average; areas in blue were below average.

Saturn’s moon Titan is home to seas and lakes filled with liquid hydrocarbons, but what forms the depressions on the surface? A new study using data from the joint NASA and European Space Agency (ESA) Cassini mission suggests the moon’s surface dissolves in a process similar to the creation of sinkholes on Earth. Apart from

NASA satellite imagery shows that for much of March 2015, the Ohio River watershed was above flood stage, particularly just above the confluence with the Mississippi River. The cause was a combination of melting snow and heavy rainfall.