The Fort McMurray wildfire, which was first reported on May 1, 2016, and not declared under control until July 5, 2016, destroyed more than 2,400 homes and buildings and forced the evacuation of 80,000 people in Alberta, Canada. Although no one died directly from the fire, it is expected to be one of the most-expensive natural disasters...

On March 9, 2016, and approximately 1 million miles from Earth, NASA’s Deep Space Climate Observatory (DSCOVR) captured the shadow of the Moon moving across Earth’s sunlit face. The only total solar eclipse of 2016 moved across the Indian Ocean and past Indonesia and Australia into the open waters and islands of Oceania and the Pacific Ocean. 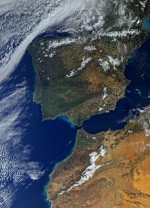 On Feb. 16, 2016, the European Space Agency (ESA) Sentinel-3A satellite was successfully launched from the Plesetsk cosmodrome in northern Russia. Sentinel-3A carries a suite of instruments that will measure Earth’s oceans, land, ice and atmosphere, providing information in near-real time for ocean and weather forecasting as part of Europe’s Copernicus program.