USGIF Partners with the Centre for Spatial Law and Policy

Herndon, Va., Oct. 13, 2015—The United States Geospatial Intelligence Foundation and the Centre for Spatial Law and Policy have entered into a memorandum of agreement under which USGIF and the Centre will educate the geospatial community on the unique legal and policy issues that impact the collection, use, storage, and distribution of geospatial information. “The

WASHINGTON, D.C., Aug. 13, 2015—The relationship between intelligence and technology will be the focus when the National Geospatial-Intelligence Agency and Georgetown University co-host the second annual George T. Kalaris Intelligence Conference, “Succeeding in the Open,”Sept. 24, from 9 a.m. to 3:30 p.m. at Georgetown University’s Gaston Hall (3rd floor of Healy Hall, 37th and O Street, Washington). Keynote speakers

NEW YORK, NY, June 24, 2015—Riverside Research, a not-for-profit company primarily serving the Department of Defense and the Intelligence Community, partnered with the Air Force Institute of Technology (AFIT) to publish "The Phenomenology of Intelligence-focused Remote Sensing" – an unclassifed textbook providing a never-before-seen breadth and depth of specialized information relevant to geospatial intelligence (GEOINT) 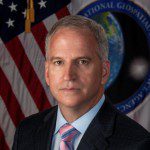 LONDON, April 6, 2015 — Geospatial information exploitation technology is one of the vital enablers and defining aspects of 21st century defence, intelligence and homeland security capabilities and operations. In a digital age where the vast majority of data has a location and time, GIS and GEOINT systems provide the means to reference it geographically. In this

MCLEAN, Va., Jan. 29, 2015—The National Geospatial-Intelligence Agency (NGA) has awarded BAE Systems a five-year contract with an estimated total value of $43 million to provide mission essential training and instructional support to NGA analysts and intelligence officers stationed across the United States and around the world. “Our seasoned experts have an outstanding reputation in