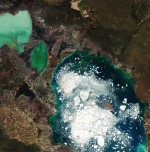 Salt and Ice in Kazakhstan

Kazakhstan’s Alakol Lake typically freezes for about two months at the end of winter and breaks up in early spring, beautifully captured in this European Space Agency Sentinel-2 image. The salt lake’s mineral-rich water and mud is considered therapeutic, and tourists often visit the lake’s northern shores to remedy skin ailments. The image’s varying shades 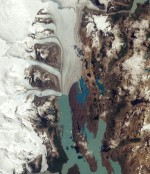