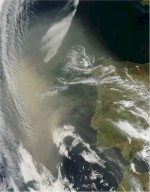 A low-pressure system with strong winds drove this thick cloud of dust from North Africa’s Saharan Desert all the way to Portugal.

Satellite Sentinel Project Aims to Deter War in Sudan DigitalGlobe collaborated with the Satellite Sentinel Project, the brainchild of actor George Clooney, to deliver the first images and analysis of the evolving situation in Sudan, following the country’s historic vote on independence in January 2011. According to DigitalGlobe Vice President Stephen Wood, the company’s 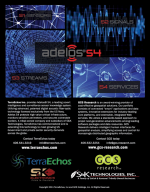 High-Resolution Airborne Imagery Security and disaster mapping specialists have an insatiable  appetite for imagery; fortunately, there’s an ever-expanding menu of sensors to meet the demand. From large-format digital aerial photos to sub-meter-resolution satellite imagery, imagery products of all kinds are at planners’ fingertips.But when it comes to planning for and monitoring changes in dynamic environments,

Tassili n’Ajjer National Park covers 72,000 square kilometers (27,800 square miles) in southeastern Algeria. Part of the Sahara Desert, the park has a bone-dry climate with scant rainfall, yet does not blend in with Saharan dunes. Instead, the rocky plateau rises above the surrounding sand seas. Rich in geologic and human history, Tassili n’Ajjer is