Following the successful introduction of the OCTOBLIQUE MIDAS 9 camera system last year, Lead’Air is announcing the final development of a new, unique DODECABLIQUE MIDAS with 12 oblique and 1 nadir cameras. This camera system was recently ordered by Dat’Air Inc, an aerial operator specializing in high attitude oblique photography. Based on the Lead’Air, fully

A Flexible Camera: A Radically Different Approach to Imaging

New York, NY—A team led by Shree K. Nayar, T.C. Chang Professor of Computer Science at Columbia Engineering, has developed a novel sheet camera that can be wrapped around everyday objects to capture images that cannot be taken with one or more conventional cameras. The Columbia team, which includes research engineer Daniel Sims BS’14 and

Scientists have created the world’s thinnest lens, one two-thousandth the thickness of a human hair, opening the door to flexible computer displays and a revolution in miniature cameras. Lead researcher Dr Yuerui (Larry) Lu from The Australian National University (ANU) said the discovery hinged on the remarkable potential of the molybdenum disulphide crystal. “This type 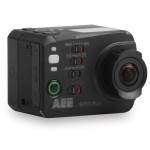 LOS ANGELES, Sept. 30, 2015—AEE, a rising player in the camera and drone industry, today announced the launch of their newest action camera: the S71T Plus. The new camera has all the features of competing cameras at an affordable price tag, and with more accessories bundled in. The S71T Plus offers all the advanced technological features

Richmond, BC, Canada, June 26, 2015 — Point Grey, a global leader in the design and manufacturing of innovative, high-performance digital cameras, today announced the addition of a new 12 MP CCD model to its Grasshopper®3 USB3 Vision™ camera line. The Grasshopper3 GS3-U3-120S6 models are based on color and monochrome versions of the 1" Sony