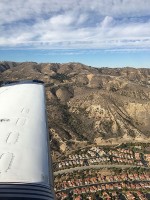 A study published in Nature Communications suggests that El Niño and La Niña weather patterns could lead to at least a doubling of extreme droughts and floods in California later this century. The study also predicts more-frequent extreme weather events.

California is in its fourth consecutive year of drought, which impacts water in the state in many ways. The main sources of consumable and agricultural water for California are underground aquifers, reservoirs and mountain snowpacks, but in recent years the volume of water in these sources has been decreasing.

Irvine, Calif., Sept. 8, 2015 – Wildfires have ravaged both populated and unpopulated regions of Southern California at an increasing rate over the past few decades, and scientists from three University of California campuses and partner institutions are predicting that by midcentury, as a consequence of climate change causing hotter and drier summers, a lot

ARLINGTON, Va.—The following statement is attributed to Brian Wynne, president and CEO, Association for Unmanned Vehicle Systems International (AUVSI), and Gary Shapiro, president and CEO, Consumer Electronics Association (CEA)®, regarding the passage of California Senate Bill 142, which would restrict the flight of unmanned aerial systems (UAS): “California SB 142 is an unnecessary, innovation-stifling and