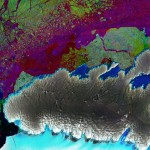 Researchers at Scripps Institution of Oceanography recently reported that Antarctica’s floating ice shelves have decreased in thickness by as much as 18 percent during the past two decades. Satellite radar altimetry mission data from the European Space Agency were used between 1994 and 2012 to determine the change.