One of the world’s first automated inspections by an intelligent drone with deep learning capabilities was demonstrated at the GPU Technology Conference Europe today by Aerialtronics, a Dutch manufacturer of technologically advanced drones, Neurala, a pioneer in deep learning software, and NVIDIA®, the world leader in GPU-accelerated computing. Video GTC Demo:  https://www.youtube.com/watch?v=-bQYzR5kARM This new “intelligent

Aerialtronics has developed a sense and avoid solution for the Altura Zenith unmanned aircraft which will fundamentally change how companies inspect telecommunication towers, energy pylons, bridges and buildings. This advanced sense and avoid solution is designed to help the Zenith UAS stay clear of objects during inspections as it relays images, video and data to

Aerialtronics Prepares for TUSExpo 2016, the Netherlands – An Unmissable Event for UAV Professionals

Aerialtronics will present a live demonstration of the Altura Zenith unmanned aerial system (UAS) at TUSExpo 2016, the fully integrated European unmanned systems industry trade show and conference, taking place on 2-4 February at the World Forum, the Hague. Supported by Aerialtronics, this TUSExpo 2016 promises to be even better than last year's event, which 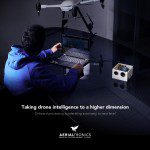 Aerialtronics Drones Fly Into Onboard Processing

Aerialtronics are taking drone autonomy to the next level by developing a smart dual camera that packs massive onboard processing power with both digital daylight and thermal camera sensors. Using NVIDIA embedded SOC platform, the project, led by Michele Moscaritolo, Head of Vision at Aerialtronics, is a giant step forward in onboard data analysis and

November 16, 2015 — Aerialtronics have revealed a unique series of commercial drone sensors for the safety and security industry which include some of the first nuclear radiation and hazardous chemical detectors on the commercial market. On the eve of the security exhibition, Milipol Paris 2015, the Dutch-based company, one of the world’s leading manufacturers

The Dutch Ministry of Infrastructure and Environment used three Altura Zenith ATX 8 drones to monitor the traffic leading to and from the Concert at Sea festival in Zeeland. The drones monitored an area of 30 square kilometres and were supported with a strong wireless network connection provided by T-Mobile. The drones, operated by the

April 17, 2015—Belgium Police MidLim announced today that they will be using a new Altura Zenith unmanned aerial system (UAS) to complement their operations in the Limburg region. They praise the Altura Zenith for its reliability, stability and versatility after deploying it 70 times to search for missing persons, monitor traffic and use for crowd