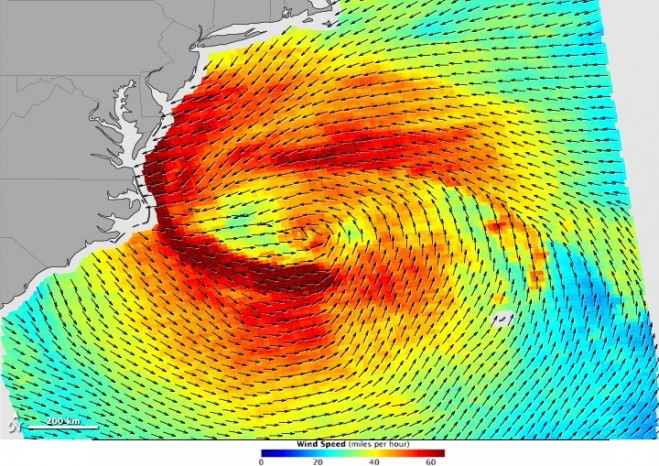 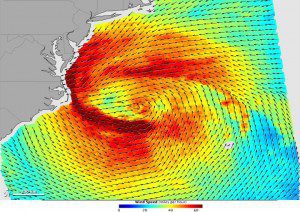 This map of Sandy’s winds, produced with data from a radar scatterometer on the Indian Space Research Organization’s Oceansat-2 satellite, shows the strength and direction of Sandy’s ocean surface winds on Oct. 28, 2012. Click on image to enlarge.

The scenes of devastation and wreckage that Superstorm Sandy (2012) and Hurricane Katrina (2005) left behind were tragically similar. But from a meteorological perspective, satellite data reveal the storms were very different. 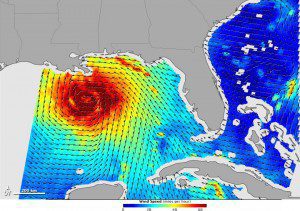 This map of Hurricane Katrina’s winds was made from similar data acquired on Aug. 28, 2005, by a radar scatterometer on NASA’s retired QuickSCAT satellite. Click on image to enlarge.

Both storms flooded major cities, cut electric power to millions and tore apart densely populated coastlines. Katrina, however, was a textbook tropical cyclone, with a compact, symmetrical wind field that whipped around a circular low-pressure center. Like most tropical cyclones, Katrina was a warm-core storm that drew its energy from the warm waters off the tropical Atlantic Ocean.

Sandy had similar characteristics while it was blowing through the tropics. But as the storm moved northward, it merged with a weather system arriving from the west and started transitioning into an extratropical cyclone.
There are fundamental differences between the two types of storms. Tropical cyclones draw their energy from warm ocean waters, but extratropical cyclones are fueled by sharp temperature contrasts between masses of warm and cool air.

Extratropical cyclones also tend to be asymmetric, with broad wind and cloud fields shaped more like commas than circles. So when tropical cyclones become extratropical, their wind and cloud fields expand dramatically. Their strongest winds generally weaken during this process, but occasionally a transitioning storm retains hurricane force winds, as was the case with Sandy.

Images courtesy of NASA and the Indian Space Research Organization.