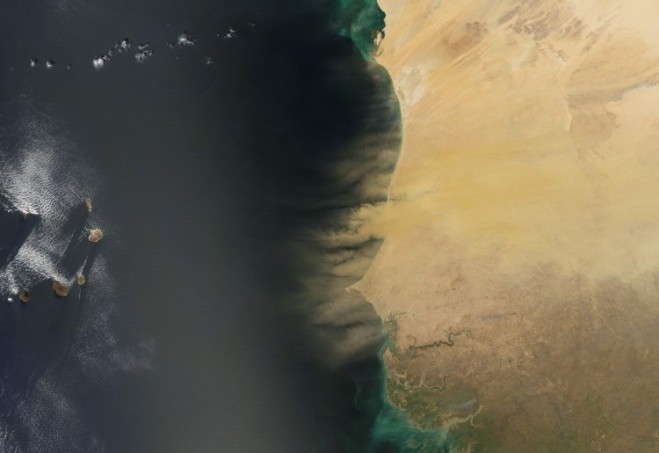 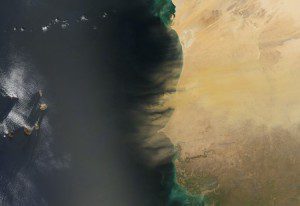 Plumes of sand from North African deserts cloud the coast in this satellite image captured by the MODIS sensor on NASA’s Aqua satellite in late February 2015.

Plumes of sand from North African deserts are easily visible in this satellite image captured by the Moderate Resolution Imaging Spectroradiometer (MODIS) on NASA’s Aqua satellite. The microscopic particles amass and begin a trans-Atlantic journey to South America.

Scientists have used data from this and other satellites to track the movement and quantify the volume of dust. Included in their calculations are the amount of phosphorous (a natural fertilizer) that gets passed from ancient lake beds in North Africa to the fertile Amazon rainforests of South America. The Amazon rainforests rely on these nutrients, because there aren’t many nutrients in Amazonian soils.

Dust transport estimates were derived from data collected from 2007 through 2013 by NASA’s Cloud-Aerosol Lidar and Infrared Pathfinder Satellite Observation (CALIPSO) spacecraft. The data show that wind and weather pick up on average 182 million tons of dust each year and carry it past the western edge of the Sahara. The dust then travels 1,600 miles across the Atlantic Ocean, though some drops to the surface or is flushed from the sky by rain. Near the eastern coast of South America, 132 million tons remain in the air and 27.7 million tons fall to the surface over the Amazon basin. About 43 million tons of dust travel farther to settle out over the Caribbean Sea.

This video details the dust’s journey: