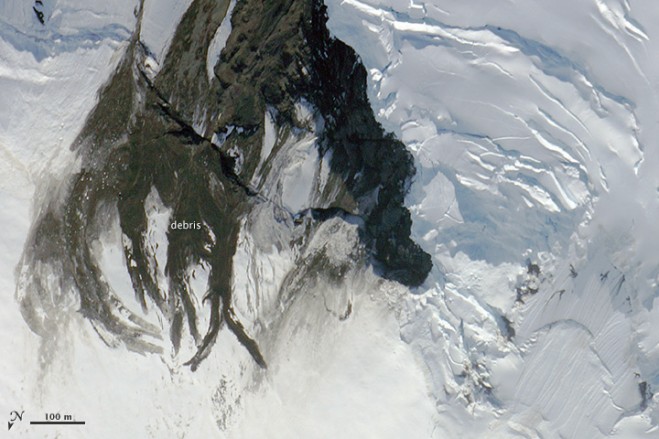 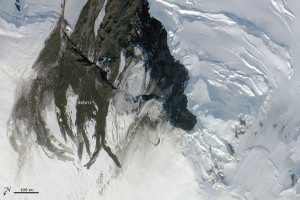 In this digital aerial photograph, acquired by NASA researchers on July 16, 2014, one day before the quake, rocks and debris from a previous landslide are littered across the young, steep slopes alongside Seward Glacier. 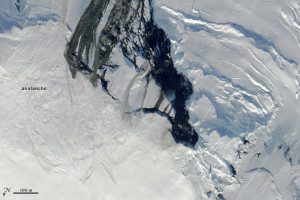 When scientists flew back over the site on July 21, snow from a large avalanche had cascaded down the mountainside and obscured remnants of the older slide.

The fortuitous timing of some recent NASA science flights gave scientists a rare opportunity to see what can happen when Earth’s polar regions are shaken by an earthquake. On July 17, 2014, a magnitude-6.0 earthquake struck beneath Seward Glacier in northwestern Canada, according to the Alaska Earthquake Information Center.

Meanwhile in Fairbanks, Alaska, NASA glaciologist Kelly Brunt and fellow scientists, engineers and pilots were gearing up for near-daily flights with an airborne instrument called the Multiple Altimeter Beam Experimental LiDAR (MABEL). The instrument has nothing to do with earthquakes; rather, scientists are using it to develop processes for interpreting data from ICESat-2, a satellite scheduled for launch in 2017.

Next to MABEL in the nose cone of NASA’s high-altitude ER-2 aircraft, scientists placed a digital camera. The images from that camera are typically used to visually confirm the type of surface—ice, open water, or melt ponds—being measured by MABEL’s laser pulses. The camera came in handy thanks to some lucky timing.

The MABEL team was already scheduled to make two flights near Seward Glacier in late July when a colleague in Maryland alerted them to the earthquake. Their flight paths were taking them as close as 2 kilometers (1.2 miles) from the epicenter of the earthquake. Flights over the region just before and after the event provided an uncommon view of an earthquake’s effect on the snow-and-ice covered landscape.

Read the full story and view images of a supraglacial lake that may have been caused to drain by the earthquake.