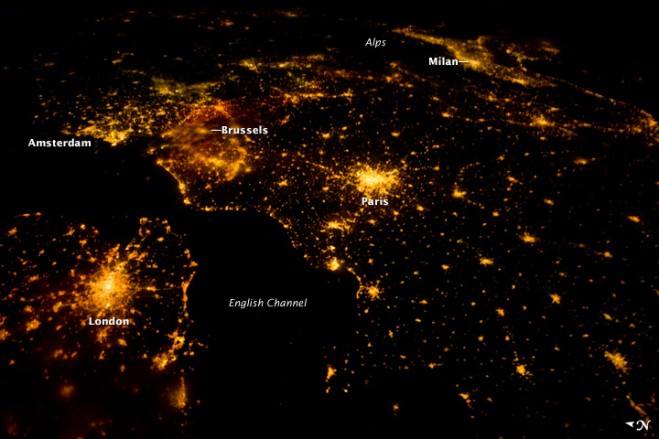 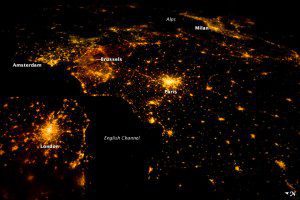 Europe’s northwestern cities shine brightly in this photograph taken from the International Space Station (ISS). To give a sense of scale, the centers of the London and Paris metropolitan areas are approximately 340 kilometers (210 miles) from each other. Taken with a short camera lens, providing the large field of view, the image is also oblique—taken looking outward at an angle from the ISS. Such an angle tends to foreshorten the image and makes the distance between Paris and Milan (640 kilometers/400 miles) appear less than that of Paris to London.

In contrast to the land surface defined by the city lights, the English Channel presents a uniform dark appearance. Similarly, the Alps near Milan are also largely devoid of lights. While much of the atmosphere was clear at the time the image was taken, the lights of Brussels are dimmed by thin cloud cover.

The photograph was acquired on Aug. 10, 2011, with a Nikon D3S digital camera using a 28 mm lens and is provided by the ISS Crew Earth Observations experiment and Image Science & Analysis Laboratory, Johnson Space Center. The image was taken by the Expedition 28 crew. The image has been cropped and enhanced to improve contrast. Lens artifacts have been removed.